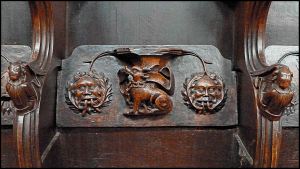 (The photograph shows a misericord from St. Laurence’s Church Ludlow (the ‘Cathedral of the Marches’), where Housman’s ashes are buried.)

In an article about my own settings of some of Housman’s poems, I mentioned that I hadn’t come across any other folkie settings of his verse, but that it would be surprising if there were none. Apparently I was right.

While looking for something entirely different, I came across this page on the Mike Raven web site: a CD with 20 tunes played on the guitar by Mike (18 are traditional and two are composed by him), and 17 Housman poems set to music by Mike and sung by Joan Mills (with Mike on guitar). Most of the poems are from ‘A Shropshire Lad’ but three are from Last Poems. In most cases Mike has used a traditional tune, but the tunes for The Deserter and Is My Team Ploughing are Mike’s own.

There’s even a short sample: it turns out that for ‘True Lover’ he’s used a tune associated with ‘The Unquiet Grave’, as sung by Jean Ward on an LP by Mike and Jon Raven called Songs of the Black Country and the West Midlands. I used to have it on vinyl and perhaps still have, somewhere. A very pretty tune, as it happens, and nicely performed by . Unfortunately, there isn’t a full track listing.

(Personal reminiscence alert.) When I was a teenager in Shrewsbury, I remember frequently seeing the Black Country Three on local television early in the evening, along with others like Lyn and Graham McCarthy, John Renbourn, and even Roger Whittaker before he started having hit singles. Later on, I met Mike Raven at a gig in Berkshire and disgraced myself by asking for a song that was one of Jon’s. Or maybe it was the other way round. Later still, I found myself in a scratch band accompanying Jean Ward on a song at somebody’s farewell gig, though I think I was there to play guitar with Bob and Mary Hands. I have no idea what any of us actually sang: it was a very long time ago. And much later still, I seem to remember that Mike Raven and I both had regular gigs at a wine bar in Kensington, but on different nights, so I never met him there. I believe he was playing flamenco at that venue.

[By another of those flukes and serendipities that sometimes arise from too much time browsing the web, I’ve discovered that the 1960s DJ who also went under the name of Mike Raven at one time also played flamenco guitar in London, so the already inconsequential reference to a Kensington wine bar might be  totally misdirected. Of course, it’s perfectly possible that the guy who played that venue was yet another Mike Raven. For years, various book sites and distributors were convinced that my book ‘Viruses Revealed’ was written by – or, bizarrely, with – a completely different author by the name of C. David Harley. There are very few totally unique names in the world…]

Sadly, it turns out that Mike Raven the Midland musician died in 2008. And the other ‘Mike Raven’ (real name Austin Fairman) died in 1997.

I think I might actually order a copy of that Housman CD. I’ll report back here if I do, though I don’t doubt that it’ll be worth listening to. [In fact, I now have a copy on order.]

Something I didn’t know: apparently Housman wouldn’t let the BBC broadcast his poems unless they were set to music and sung.

Seek and ye may find